Our work is concerned with computer-aided design methodology for chemical swarm robots, which is based on mathematical modelling of their collective behaviour in an environment with complex topology, taking into account all relevant physical laws. The design of chemical swarm robots is a parametrically rich problem, therefore computational modelling is necessary in order to systematically investigate the effect of key parameters such as the particle size, diffusion coefficient of the chemical signals, the trigger threshold for signal release, or the number of robots present in the target area, on the success of the mission prior to its attempted physical realisation.

In the present work, the following scenario is considered: a 2-dimensional porous simulation domain contains a target. A group of chemical robots fully loaded with chemical signals is injected to the opposite side of the simulation domain. The robots are supposed to locate the target by a combination of random and oriented movements. Initially, the robots move exclusively by random Brownian motion. Once the first robot enters the proximity of the target it begins to release the chemical signals to attract its peers by means of the diffusiophoretic mechanism. Subsequent motion of the robots then depends on the balance of random and oriented movements and the robots may or may not reach the target as coordinated swarm. An example of such target localisation mission by chemical swarm robots is displayed in Figure. The governing equations for the movement of individual robots, the release kinetics and diffusion of chemical signals, and for the simulation domain topology are described in our publications. 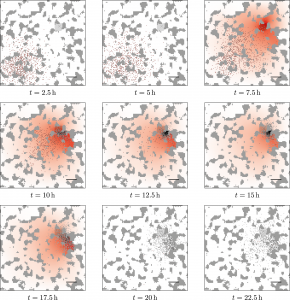 The progress of a target localisation mission by chemical swarm robots in porous environment. The target is indicated by a cross and the overall target area ΩT is shaded by the light grey colour. The concentration of chemical signals in both the robots and the domain is indicated by the intensity of the red colour. The parameters values are α = 0.56 μm2 s-1, β = 0.1 s-1, DS = 1000 μm2 s-1. Scale bar, 50 μm.

We are always looking for motivated students at all levels (even 1st year undergraduates), postdocs and senior researchers to join our lab!